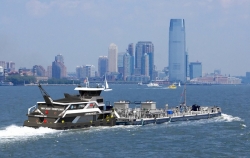 Maite Klarup, the global commercial director at e1 Marine, will lead a presentation on the MV Hydrogen One – an ultra-low-emission methanol-fueled towboat – at 2:00pm on Day 1 of the Electric & Hybrid Marine Expo Europe Conference.

With the International Maritime Organization having introduced a carbon reduction target for 2050, e1 Marine believes hydrogen fuel cell technology can help to reduce levels and address the maritime sector’s requirements for power, range and duration.

During the presentation, Klarup will share the design and specification details of the methanol-hydrogen fuel cell towboat, which is scheduled to be operational by Q4 of 2023. She will also explain how different applications of the technology could enable the maritime industry to transition from low carbon to carbon neutrality.

“As commercial and regulatory pressures to decarbonize shipping intensify, alternative fuels are a critical part of the solution,” commented Klarup. “While there is a basket of fuels being considered by operators, cost, availability and infrastructure are key factors that will determine which fuels are most sustainable – environmentally, operationally and financially.”

Klarup continued, “MV Hydrogen One is the world's first methanol-fueled towboat which will be IMO 2030 compliant and in operation in 2023. It is a milestone for the towboat industry but also the shipping industry as a whole. Many low-carbon fuels just aren’t easily accessible today; however, methanol is available in 88 of the world's top 100 ports and the current infrastructure and availability enable a vessel to refuel safely almost anywhere without the need for costly diversions. Methanol, which is already an approved fuel type currently in use in the marine industry, has cost advantages that apply today, even in comparison with current diesel generators and before considering any new regulation or carbon tax.

“At e1 Marine, with methanol being a safe and cost-effective carrying medium for hydrogen, we see hydrogen as the solution to achieve the target of net zero in the maritime sector. MV Hydrogen One is the model for what short sea shipping could look like in the very near term,” concluded Klarup.