BECOME AN EXHIBITOR
REGISTER TO ATTEND

Brittany Ferries is to explore the possibility of a high-speed, sustainable ferry called a seaglider. The concept is based on an all-electric, wing-in-ground-effect vehicle (WIG), and is currently under development in Boston, Massachusetts, by startup company REGENT (Regional Electric Ground Effect Nautical Transport).

A letter of intent has been signed by Brittany Ferries to bring seagliders to routes between the UK and France by 2028, carrying around 50-150 passengers across the Channel. REGENT estimates that by 2025, the first commercial passengers will travel on smaller electric craft.

By combining hydrofoils, the aerodynamic efficiency of hovercraft and the speed of aircraft, seagliders could become a convenient mode of transport in years to come.

A fourth Island Class ferry built for Canadian operator BC Ferries has set off from Damen Shipyards in Galati, Romania, on a transatlantic journey to Victoria, British Columbia, Canada.

The unnamed ship is expected to complete the trip in 60 days under its own power. Two stops have been scheduled for refueling during the 10,700 nautical mile journey, one before and one after the Panama Canal. The ship will then make its way along the west coast of North America before arriving at its destination at the Point Hope Maritime shipyard in Victoria.

BC Ferries’ first two Island Class vessels were transported from Romania to British Columbia on a semi-submersible vessel in 2019 before entering service on the Powell River-Texada Island route and the Port McNeill-Alert Bay-Sointula Island route in mid-2020.

Partners in the Norwegian TrAM (Transport – Advanced and Modular) project have announced that construction has commenced on what is claimed to be the world’s first fully electric passenger fast ferry, with work underway at the Fjellstrand shipyard on the west coast of Norway.

Equipped to carry around 150 passengers, the catamaran will be 31m long with a 9m beam. It is to be equipped with two electric motors and a 1.5MWh capacity battery with charging power of more than 2MW. The project coordinators state that this will be the world’s first fully electric and zero-emission fast ferry, classed in accordance with the International Code of Safety for High-Speed Crafts (HSC Code).

Destined for the renewable offshore wind market, the new CSOVs will be built to Kongsberg Maritime’s UT 5519 DE design by the Chinese shipyard China Merchant Heavy Industry (CMHI), with which KM has a long relationship. The vessels are scheduled to be delivered in 2023; according to the company, they are designed with a clear focus on reduced emissions and enhanced sustainability.

Norwegian company HAV Design has signed a contract to design two new battery-powered ferries for operator Fjord1; the vessels will be constructed by the Turkish Tersan Shipyard. The two HAV 934 ferries, the 13th and 14th zero-emissions craft the company has designed, will operate on the Stranda-Liabygda and Eidsdal-Linge routes in Norway.

Lars Conradi Andersen, VP of sales at HAV Design, noted that his company’s currently operating battery-powered ferries have contributed to a green transition in Norwegian ferry traffic and made many fjord ferry services more environmentally friendly. “It is particularly pleasing that our designs will now contribute to the ferry revolution in a World Heritage area whose nature requires extra protection.

Michelin unveils solution to aid in the decarbonization of maritime operations

With Michelin looking to build on its sustainability vision, the inflatable sail will harness wind – a free, universal, infinite source of propulsion – for an array of ships, including freight carriers.

By installing the inflatable propulsion system, it is expected that vessels will reduce fuel consumption and CO2  emissions, resulting in less impact on the environment during operations. The most suitable applications for the inflatable sail include ro-ro ships, bulk carriers and oil and gas tankers. 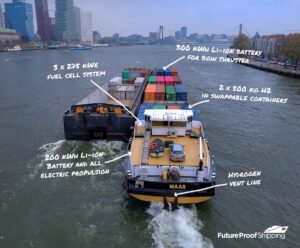 “The maritime knowledge and expertise of the Koedood Group, together with the fuel cell capabilities of Nedstack, provide us with an optimized product we can be confident in. It helps that we are all on the same page: collaborating to create a more sustainable future for the inland waterways in Europe,” remarked Fokke van der Veen, director of operations at FPS.

Cavotec says that it has won a series of orders worth €5m (US$6m) to equip the world’s largest new-build container ships with its ShorePower systems. The latest contracts are in addition to the company’s €3m (US$3.6m) worth of orders in the first quarter of the year.

One of the world’s largest shipbuilders, MSC, and Samsung Heavy Industries (SHI) make up a large percentage of the orders.