Six further ocean-going cargo vessels that can run on green methanol have been ordered by Maersk from ship builder Hyundai Heavy Industries (HHI).

Each 17,000 TEU vessel benefits from a dual-fuel engine which enables sustainable maritime operations and an estimated CO2 saving of 800,000 metric tons each year between the six ships. The vessels will replace existing capacity within Maersk’s fleet.

Benchmarked against conventional fuel capabilities, additional capital expenditure for the methanol dual-fuel capability is in the range of 8-12%, an improvement compared to eight vessels ordered by Maersk in 2021 which feature the same technology.

Shift Clean Energy, a pay-as-you-go energy subscription service provider for the maritime industry will supply its PwrSwäp technology to the Hydromover, the first all-electric battery-swapping cargo vessel in the Port of Singapore.

The announcement was made at a keel-laying ceremony, led by SeaTech Solutions International (SeaTech) in collaboration with Yinson GreenTech (YGT) and Goal Zero consortium members. The Hydromover vessel, which was designed by SeaTech, is owned by YGT and is set to be the first to use the PwrSwäp technology. Shift’s pay-as-you-go energy subscription service has been developed to deliver clean, renewable energy to ships, aiding a transition to cleaner forms of power.

Lisa Edvardsen Haugan has been appointed president of marine technology company Kongsberg Maritime. She will succeed the current president, Egil Haugsdal, on November 1, 2022.

Edvardsen Haugan has held several key roles at Kongsberg and has many years of experience gained within the company’s defense and civil business sectors. She has also been EVP of finance at Kongsberg Maritime and finance director at Kongsberg Protech Systems. She is currently head of Kongsberg Maritime’s deck machinery and motion control division.

“Lisa has proven high capacity and a strategic mindset,” said Geir Håøy, CEO of Kongsberg Gruppen. “I am confident that with her long industrial experience she is the right person to further develop the global maritime leadership position we have.

The April 2022 issue is now available online! Packed full of news, interviews and features, including:

Cover story: Electric Elegance 38
The day cruiser that aims to bring a sense of luxury and refinement back to yachting – with zero-emission propulsion.

Inbuilt vs portable
Leading industry figures debate the benefits and drawbacks of permanent and swappable battery systems for vessel applications.

US Expo preview 2022
Everything you need to know ahead of Electric & Hybrid Marine Expo North America, taking place in Houston Texas this November.

Green hydrogen developer and ammonia producer EverWind Fuels and towage operator Svitzer have signed a memorandum of understanding (MoU) that will see the duo deploy one of the world’s first green fuel-powered commercial tug vessels in the Canso Strait in Nova Scotia, Canada.

As part of the MoU, EverWind will supply green fuel from the company’s green hydrogen and ammonia production facility in Point Tupper, Nova Scotia. EverWind will also provide the infrastructure needed at its marine terminal to enable storage and fueling. Additionally, Svitzer will be responsible for obtaining or retrofitting a commercial tug vessel capable of operating using green fuels at EverWind’s Point Tupper site.

Energy storage systems (ESS) from Shift Clean Energy will be fitted to 17 new hybrid and electric tugboats. The fully electric tugboats will be used by customers including Vallianz and Zeeboat, with the hybrid tugboats being utilized by other companies. The vessels are set to begin operations in 2023 and 2024.

Compared with traditional tugboats, e-tugs can reduce nitrogen oxide by 150 tons and carbon dioxide by 2,000 tons each year.

“We are seeing customers and designers gravitate toward our solutions due to their inherent reliability, long life and safe operations. The Shift-powered tugboats are all equipped with built-in fire detection and fire prevention systems,” said Brent Perry, CEO and founder of Shift. 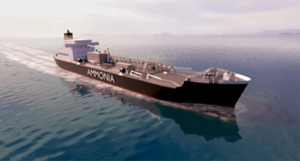 An Approval in Principle has been granted by ClassNK to Nippon Yusen Kabushiki Kaisha (NYK Line) for its ammonia bunkering vessel (ABV). This marks the first time ClassNK has awarded an AiP to an ABV.

Developed by NYK Line, the ABV will be used as a bunkering vessel for ammonia-fueled vessels which are currently growing in popularity due to the fuel not emitting CO2 .

During the development stage, NYK reworked its own drawings by introducing 3D models at the concept design stage. This enabled the company to add specifications into the design which incorporated safety measures for the use of ammonia, including hazardous areas and escape routes which were based on prior risk assessments.

Aimed at the international high-speed ferry market, the zero-emission vessel is one of several being developed by the company based in Belfast, Northern Ireland. The 24m vessel is powered by the Artemis eFoiler electric propulsion system and is capable of a top speed of 38kts when flying above the water on hydrofoils. A range of 115 nautical miles is possible at a cruise speed of 25kts.