Electric jet propulsion quite unlike any other
SEALENCE 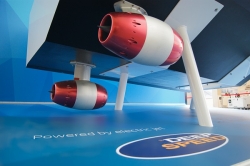 DeepSpeed offers a very different propulsion solution from existing systems, according to its manufacturer, SEALENCE. An aircraft-inspired electric jet propulsion system, DeepSpeed provides very high efficiency, while differing so much from other propulsion systems that it has been patented in 52 countries worldwide, with the jet and electric motor integrated in the same machine and positioned outboard from the hull.

The propulsion system is completed by a modular and highly sophisticated powertrain, consisting of advanced battery systems and variable speed range extenders, which make it extremely powerful and compact.

One of the most distinguishing aspects of DeepSpeed powertrains are their sustainability and lack of polluting emissions, so much so that the systems are promoted as ‘ready for Tier 5’, with regard to today’s MARPOL Annex VI legislation.

The range of jets available varies from 280 to about 400hp, with a 1,000hp single jet currently under development. Range extenders selection varies from 180-500KW.

Another distinctive feature of the powertrain is the latest generation of sophisticated batteries developed in collaboration with Fiat Powertrain Technology (Iveco Group). These batteries boast a weight/power ratio among the best on the market today, and do not catch fire even in the event of serious damage.

The entire battery pack is immersed in a non-flammable liquid that guarantees the ideal operating temperature of the cells, for the benefit of their reliability and durability.
Laboratory tests show that when a destructive phenomenon occurs on a cell, the fire fails to spread to the adjacent cells, in order to avoid fires on board.

Developed by SEALENCE, an Italian startup with 43 staff and collaborations with four universities, the CNR (National Research Council), and RINA, the technology has been undergoing validation tests for several months, in collaboration with prestigious Italian and international shipbuilding brands.

The first commercial applications are expected to arrive on the market in 2023.