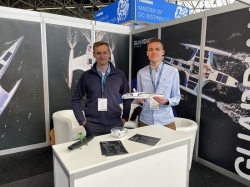 The company’s Guardian Autonomy product is being proved on the Mayflower Autonomous Ship (MAS), which recently made its maiden voyage – a 4,400km trip from Plymouth in the UK to Halifax in Nova Scotia, Canada. The system combines real-time weather and current and AIS data with local sensors (radar, sonar, lidar), computer vision and complex modeling to make course, speed and direction decisions that maximize safe navigation and fuel efficiency and ensure full regulatory compliance.

“We’ve been working for a number of years on autonomous software for navigation and for controlling boats at sea,” explained Matthew Ratsey, Marine AI’s managing director. “Our tech demonstrator, Mayflower, has just made its first voyage. It is the first unmanned vessel to go across the Atlantic using our Guardian AI software, so we’re keen to inform people here about the possibilities.”

Speaking about the lessons learned during the Mayflower voyage, Ratsey suggested that the reason why the ship never arrived at its original destination (Plymouth, Massachusetts) had little to do with the autonomous tech on board: “It’s the engineering of components that needs to catch up with the software and the AI,” he said. “The quality and redundancy of components are not at the same level as the software. How many commercial vessels go to sea without a mechanical or electrical engineer? They don't. But with MAS, there’s no one on board and there's nothing you can do to any of the mechanical systems apart from maybe turning some on and off remotely. So it’s very, very challenging. The issues we had on the ship during the trip were almost entirely down to mechanical and electrical failures with raw water pumps and alternators, rather than the sensors or the AI.”