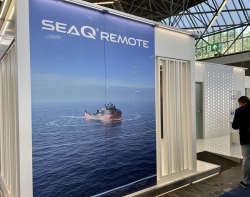 The new product, which will debut on 14 new-build marine robotic vessels contracted with shipbuilder Vard, is designed to unify the SeaQ suite of automation systems into a single user interface with the full range of remote functionality from shore.

“This represents a technological leap that is also the natural next step in our evolution based on long-established expertise in supply and integration of advanced SeaQ automated control systems for such areas as energy management, propulsion, bridge and navigation on more than 300 vessels,” said Vard Electro’s CEO, Andrea Qualizza.

“We are now investing heavily in autonomous technology and digitalization, supported by synergies in the wider Fincantieri group, in line with market demands for cost-efficient and green operations, capitalizing on our long and proven experience in the shipbuilding industry.”

Going beyond automated navigation and other IT systems on the bridge, SeaQ Remote extends smart data-driven functionality to operational technology (OT) in the vessel hull, as it enables remote operation of existing machinery systems such as engines, propellers and thrusters.

Such machinery is connected by sensors that can stream real-time data via the cloud to an onshore control center. Merged data from these sensors on a unified user interface provides a smarter way to gain an enhanced awareness of the status of onboard systems.

Benefits include fuel consumption monitoring to cut costs and emissions; condition monitoring for preventive maintenance on vital systems, thereby reducing vessel downtime and improving safety; and automation of key tasks such as reporting to reduce the crew workload.

In a further advance on existing remote technology, SeaQ Remote also supports a remote deck machinery interface to facilitate some deck operations in support of reduced manning and enhanced safety on board.
“The key benefits of this technology are lean manning, safety and having an expert in the loop 24/7 to ensure automated systems on the vessel are running smoothly. This will enhance the cost-efficiency and sustainability of operations,” added Vard Electro’s SeaQ Remote product manager, Ronny Tomren.

This is being demonstrated on the new-builds being constructed by Vard, which will have battery technology installed and will also be prepared for hybrid fuel cells. These marine robotic vessels will be operated from shore, making them among the first DP2 vessels capable of remote operation worldwide.

Vard Electro’s vice president of products, Øystein Longva, concluded, “This new-build contract is the first commercial application of SeaQ Remote. We are now targeting further deliveries for both retrofits and new-builds, also as part of a turnkey solution with automated control systems.”