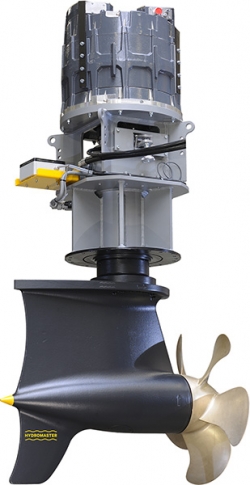 Hydromaster Propulsion will showcase its azimuth propulsion expertise at Electric & Hybrid Marine Expo Europe 2022 in Amsterdam. The company offers a range of thrusters up to 950kW. Its most recent development, the High Speed Azimuth Thruster, is a fully 360° steerable thruster specially designed for commercial vessels with a speed of up to 29kts. The commercial rating allows the thrusters to be used at full power continuously, complying with the standards of all major classification bodies.

The sleek, hydrodynamically optimized shape of the lower gearbox has an extremely low resistance coefficient. A vertically placed electric propulsion motor is directly mounted on top of the thruster, which minimizes transmission losses and increases efficiency – particularly useful for all-electric vessels that depend on battery power only.

Six newly built 29m hybrid catamarans (known as the Waterbus in Rotterdam in the Netherlands) have been outfitted with two electrically driven Hydromaster propulsion thruster units, pushing the catamarans through the water at a speed of up to 23kts. The vessels are due to enter service in mid-2022.

Another development on show will be the transom-mounted electric L-drive azimuth thruster, suitable for low-speed applications like pushers and workboats. Hydromaster has been awarded a contract from Kotug for the supply of two 300kW electrically driven azimuth thrusters for a 16.5m all-electric push boat for zero-emission barging of cocoa beans from Cargill, between the Port of Amsterdam and Kotug’s cocoa facilities in Zaandam in the Netherlands.