The challenges of decarbonizing shipping

The International Maritime Organization (IMO) has set the goal of reducing the shipping industry’s greenhouse-gas emissions by at least 50% by 2050, and reducing the carbon intensity of emissions by 40% by 2030 and 70% by 2050, compared with 2008 levels. Shell recently commissioned a report into the feasibility and challenges of meeting these targets, and identified 12 possible solutions to attain these goals.

The report was based on over 80 surveys across the industry, consulting with CEOs, financiers and ship builders to draw its conclusions. According to Grahaeme Henderson, VP shipping and maritime at Shell, previous work in the safety arena provided a starting point: “In Shell Shipping & Maritime, a key focus area has been on improving safety across the industry.

A new electric guard vessel for offshore installations is under design by a consortium led by LISA, a community of maritime professionals, and incorporating input from suppliers such as C-Job Naval Architects and eL-Tec Elektrotechniek.

The vessel will operate autonomously and will not require any crew. Therefore, the consortium said, accommodation can be eliminated in the design, meaning the ship will be considerably smaller than existing guard vessels. It noted that the smaller size creates a number of opportunities, such as using batteries rather than generators thanks to reduced propulsion requirements. Additionally, the lower energy consumption and lack of onboard crew leads to lower operational costs. 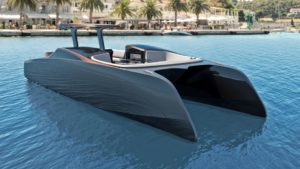 German/US startup Voltaire Electric Yachts has launched its 33 Sky model, a sub-10m vessel with a displacement of 4.7 tons, as pure electric and hybrid power continues to prove a growth area in the yacht industry.

Propulsion for the new craft will consist of two Torqeedo Deep Blue engines rated at 50kW each, with one in each of its catamaran hulls. The company noted this will afford a very tight circle.

The motors will be fed by a pair of 42.2kWh batteries sourced from BMW, originally intended for use in the i3 road car. These battery packs are increasingly popular with small electric boat builders, and Voltaire said they will come with a nine-year warranty.

When North Sea Giant was delivered to her Norwegian owner, North Sea Shipping, in 2011 she was the world’s most advanced offshore construction vessel. After an upgrade including the installation of triple-redundant battery banks, she can claim that title again, according to DNV GL, the maritime advisory specialists.

“She does all the high-end work, like spool installation and umbilical work,” says Sveinung Økland, operation manager at North Sea Shipping, about the company’s flagship. “She can install very large subsea components, and because of the large deck space she can perform two to three different tasks during a single deployment.” In 2011, the year of her delivery, the ship won Offshore Support Journal’s ‘Vessel of the Year’ award. 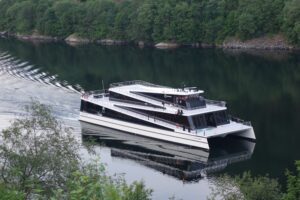 According to John Vonli, managing director of The Fjords, the delivery of the vessel marks an important milestone for the company. “Our mission has been to share the fjord experience with as many people as possible while reducing our impact on a fragile ecosystem,” he said.

Like Future of The Fjords, Legacy of The Fjords was designed and constructed by Norwegian shipyard Brødrene Aa.

The Damen Shipyards Group has delivered five of its 2306 E3 electric ferries to Arriva Denmark in Copenhagen where the company is operating the vessels on behalf of Danish public transportation agency Movia. The vessels are based on what Damen calls its ‘E3 philosophy’ – environmentally friendly, efficient in operation and economically viable.

Damen said that improving the efficiency and reducing the environmental impact of the vessels began at the earliest concept stages. For example, computational fluid dynamics (CFD) were applied to the hull design, minimizing resistance in the water, while extensive simulation was employed to optimize energy transfer between the batteries and motors.

The Solar Eclipse Aquanima 40 yacht, constructed by Azura Marine, has undergone a successful four-hour sea trial off the coast of Bali, Indonesia.

The boat’s builders stated that it achieved a maximum speed in excess of 8.5kts, but more importantly, was able to cruise at a steady 4.5kts, while consuming less power than was captured by its solar panel array. At this speed, it used 2kWh while the panels produced 8kWh. As a result, the vessel returned to its mooring with a fully charged battery. The company noted that throughout the sailing, navigation systems and domestic appliances were also consuming energy.

According to researchers at the University of Saskatchewan, the use of affordable materials in battery cathodes for large scale applications, including marine use, could soon become a reality.

“Cathodes represent 40% of the cost of the batteries that we are using in our phones right now. They are absolutely crucial to improve battery performance and reduce dependency on cobalt,” said Majid Rasool, lead author on a paper (PEDOT Encapsulated and Mechanochemically Engineered Silicate Nanocrystals for High Energy Density Cathodes) that investigates the use of iron and silicon for cathodes.

Both iron and silicon are abundant materials, hence why Rasool’s research team wanted to further investigate their potential in battery applications.