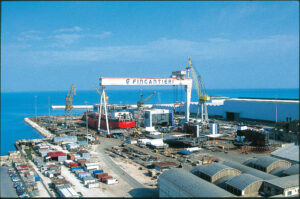 Ship builder Vard, a subsidiary of Fincantieri, has signed a contract to design and construct a vessel for Akraberg, which will incorporate the latest in hybrid propulsion system.

In addition to the diesel mechanical-diesel electric hybrid motor which will allow smokeless operation at anchor, in ports and in environmentally sensitive areas, the unit will measure 84 meters with a beam of 16.7 meters, with accommodation for 25 people in single cabins.

Akraberg, part of the Framherji group and one of the leading fishing companies in the Faroe Islands and the vessel will be the first built by Vard to operate in that part of the world. 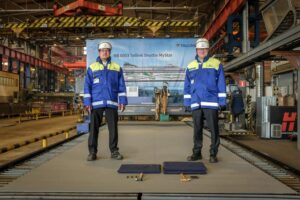 Rauma Marine Construction (RMC) announced this week that work has begun on the production of Tallink’s new shuttle ferry, MyStar, at the Rauma, Finland shipyard despite the Covid-19 pandemic.

Tallink’s new car and passenger ferry will be the largest ship built at the RMC shipyard in Rauma, Finland yet. The ship will be energy efficient due to its dual-fuel LNG system to be designed and constructed by Høglund with Finnish tank manufacturer West Welding.

The vessel’s advanced, certified electric propulsion system allows the ship to operate energy-efficiently in all circumstances at speeds of up to 27 knots. 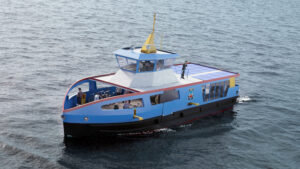 The fully-electric ferry will measure 24.7 meters with a width of 6.5 meters and will be 100% emission-free, entirely powered by battery power.

Corvus Energy has announced that it will be moving forward with investment plans to expand its Canadian facility in Richmond, British Columbia, to further increase manufacturing capacity.

AS reported in the first quarter of 2018, the company plans to expand its maritime battery manufacturing operations at its facilities in Bergen, Norway, and Richmond. The new Bergen based automated battery plant started to produce energy storage systems (ESS) in the final part of 2019, with the next stage involving the installation of new production line equipment at the Canadian plant.

CEO of Corvus Energy, Geir Bjørkeli, said, “With anticipated growth in the market, increased capacity and production flexibility are crucial to keeping up with customer demand.

Leoch, a supplier of marine batteries, has recently announced that it will be acquiring a 100% stake in DBS Leoch, a UK-based battery specialist.

As one of the largest battery manufacturers in the world, the agreement to acquire the entire stake of DBS Leoch will see a new company, Leoch Battery UK become the UK subsidiary of Leoch International. The changes will enable Leoch to grow its battery business from leisure and industrial sectors in the UK. The new business will be based in Market Harborough, Leicestershire, and will employ all 20 of DBS Leoch’s current staff.

Fred Hapiak, president of Leoch International Holding, said, “We are extremely focused on growing our business in the EMEA region and the UK in particular, and providing the best service to our customers in many sectors, from lead batteries to Li-ion batteries for leisure, automotive, UPS, telecom, renewables and industrial applications.

Shell has started feasibility work on what could turn out to be the largest green hydrogen project in the world. The company is working alongside the founding partners of the NortH2 Project – Gasunie (a Dutch gas grid operator) and the port of Groningen.

The trio are currently looking for other companies to join the collaboration who are conducting a one-year feasibility study.

The project is aiming to provide 3-4GW of offshore wind capacity established in the North Sea by 2030 that will only be used for the manufacture of green hydrogen. Electrolyzers will be installed along the northern coast of the Netherlands, in Eemshaven, and by 2040 the project may expand with added offshore electrolyzers that are set to produce 10GW of power.

The PSA Polaris, a harbor tug owned and operated by PSA Marine, has been retrofitted with Wärtsilä technology that enables a ship to navigate autonomously. Before real-world trials began, digital integration and system testing was carried out using Wärtsilä’s autonomous ship simulator alongside TCOMS, who further validated the ship’s potential using a physics-based digital twin that was subjected to the effects of the physical environment that the vessel was to face during sea trials.

In September 2019, initial sea trials were carried out in the Maritime and Port Authority of Singapore’s MASS regulatory sandbox, a facility specially designed for the safe and controlled testing of MASS and other autonomous technologies. 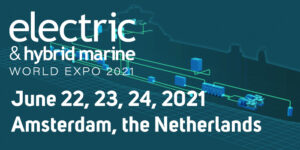 Electric & Hybrid Marine World Expo has been postponed to June 22, 23, 24, 2021. The show, which will take place in the Rai, Amsterdam, the Netherlands, as it does every year, had been scheduled to run this June, but the organizers consulted exhibitors and visitors, and concluded the right move was to postpone the event.