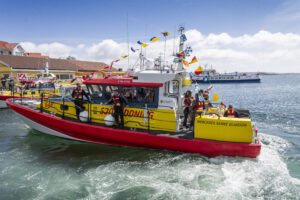 Torqeedo has provided a battery-electric propulsion system for a new dual-mode boat recently launched by the Swedish Sea Rescue Society. The new boat is the first-ever in the Sea Rescue Society’s fleet to have parallel diesel and electric motors. The primary powertrain is twin 650hp Scania diesel engines with water jets. The electric drive system consists of dual Torqeedo Deep Blue 50KW electric motors for a combined 160hp-equivalent with two 10kWh Deep Blue lithium batteries. The vessel can operate silently and emission-free up to 1.5 hours between recharges at a search speed of 6kts.

“We use the electric mode when entering and leaving port through Sweden’s environmentally sensitive waterways,” said Lars Samuelsson, head of the Maritime Department. 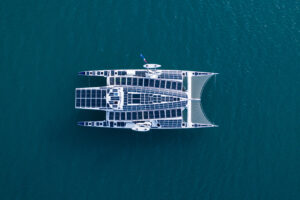 Toyota, official partner of the first energy-autonomous hydrogen vessel Energy Observer, has announced it has developed a fuel cell system for maritime applications, with its first delivery destined for the electrically propelled vessel.

Operated using a mix of renewable energies and an onboard system that produces carbon-free hydrogen from seawater, Energy Observer is half-way through a six-year odyssey around the world to promote greener technologies and economic possibilities.

“We are very proud to embark the Toyota Fuel Cell System on our oceans passages, and test it in the roughest conditions,” said Victorien Erussard, founder and captain of Energy Observer. 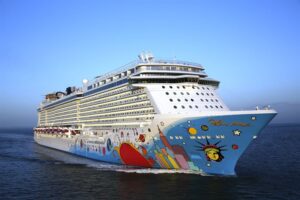 The 325m-long (1,066ft) Norwegian Breakaway and Norwegian Getaway vessels will be fitted with Wärtsilä scrubber systems, enabling them to be in compliance with the International Maritime Organization’s (IMO) sulfur restriction legislation while operating on heavy fuel oil (HFO). The legislation became effective in January 2020. Customization of the system was required in order to meet the ships’ restricted space availability.

NES, the Norwegian battery systems provider, has been selected by Fjord1 to provide hybrid system integration for three of its 125-capacity car ferries.

The Moldefjord-series ferries will be converted during the second half of 2020, with battery packs, integrated electrical and automation systems delivered by NES. Ferry berths will also be equipped with a land-based charging system to serve the updated vessels. Originally designed by LMG Marin of Bergen and built by Remontowa in Poland, the ferries will have their combustion engines replaced to become fully zero-emission.

“After several previous deliveries to our ferries, we have gained good experience with NES,” says Nils Kristian Berge, project director at Fjord1.

The world’s leading international event for electric and hybrid marine technology has revealed its preliminary program for the 2020 conference. Electric & Hybrid Marine World Expo and Conference will be held June 23, 24, 25, 2020 at the Amsterdam RAI, the Netherlands, and will once again provide an exceptional opportunity to see industry leaders share their innovations, knowledge and insights through a comprehensive and diverse range of conferences and panel discussions. Highlights include:

A study by UMAS and the Energy Transitions Commission for the Getting to Zero Coalition has concluded that the collective investment required to meet the global target of halving shipping emissions between 2030 and 2050 is between US$1tn and US$1.4tn. The figure equates to a required investment of US$50bn to US$70bn annually over 20 years.

“We need to understand the scale of the challenge to solve it,” says Johannah Christensen, managing director at the Global Maritime Forum, a partner of the Getting to Zero Coalition. “Shipping’s shift to zero carbon energy sources calls for significant infrastructure investments.

Torqeedo, the German electric and hybrid drive manufacturer, has supplied a battery-electric system to the Swedish Sea Rescue Society.

The Rescue Mercedes Eliasson Sanne is the first vessel in the fleet to have parallel diesel and electric motors, allowing it to operate for up to 90 minutes on electric power alone at a speed of 6kts. Dual Torqeedo Deep Blue 50kW electric motors are powered by two 10kWh Deep Blue lithium-ion batteries, combining with the primary twin-650 horsepower Scania diesel units.

“We use the electric mode when entering and leaving port through Sweden’s environmentally sensitive waterways,” said Lars Samuelsson, head of the Maritime Department.

The companies are working on the systems engineering of the Arksen 85, with the first vessel due to enter production early this year, and will feature a full hybrid propulsion package supplied by Praxis. The predicted range of the vessel will 7,000 nautical miles on a single tank of fuel, and will be supported by solar charging to offer silent operation.

“When deciding upon the powering and propulsion for the Arksen range of vessels, it was vitally important that we found not only the most suitable equipment package, but the right partner to work with on the development of this most crucial of vessel systems,” says Jim Mair, Arksen’s technical director.